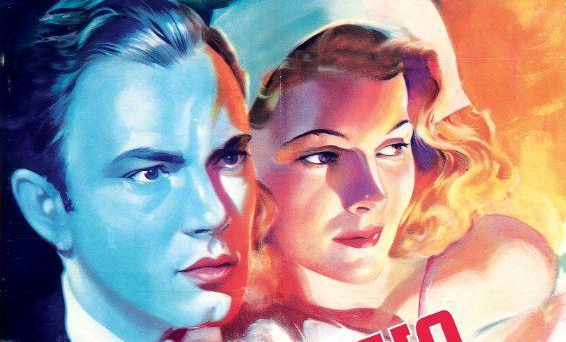 The star of The Man Who Found Himself, a 1937 RKO B-movie directed by Lew Landers, is supposed to be John Beal, an actor whose career stretched from 1933 to 1993. But as anyone with eyes can see, the real star of this little forgotten melodrama-with-a-capital-M is 19-year-old Joan Fontaine in her first starring role.

The Man Who Found Himself has a preposterous plot, written by J. Robert Bren, Edmund L. Hartmann, Gladys Atwater and Thomas Lennon, based on Alice F. Curtis’ story Wings of Mercy. Beal stars as Dr. Jim Standon Jr., the son of a well-respected surgeon who also likes to fly on the side, despite his father’s (George Irving) wishes he stay on the ground. Jim is also engaged and is on the road to becoming a prominent surgeon himself.

One day, he finds himself at the center of a scandal – a married woman is killed when he crashes a plane during a rain storm, and the papers think he was having an affair with her. So what is a disgraced doctor to do? Jim decides to hitch-hike across the country to California, where he randomly meets friend Dick Miller (Phillip Huston). Dick sets him up as a mechanic at a local airport, where he meets the beautiful nurse Doris King (Fontaine). She not only has eyes for Jim, but she also wants to see him live up to his full potential after she learns his true identity.

Somehow, this all plays out in just 67 minutes and Fontaine doesn’t come into the film until about 20 minutes in. When she does though, she brings a ray of sunshine to what is otherwise a pretty run-of-the-mill movie about a rich guy we’re all supposed to feel sorry for. Her character is not really that well-written, and only exists to make Jim feel better about himself. But you can just see the wheels of Fontaine’s mind working in her head to find a way to deliver a memorable performance.

Aside from Fontaine, The Man Who Found Himself isn’t that bad. Beal is a pretty good actor who just never found a breakout role. (Some of his other ’30s credits include Les Miserables, The Little Minister, Madame X and Double Wedding.) There is also a strong supporting cast around him, including George Irving, Jimmy Colin, Frank M. Thomas and Diana Gibson.

The Man Who Found Himself ends with a unique title card introducing Fontaine as a “new RKO screen personality.” Fontaine already had a handful of supporting roles on her resume at this point, but this movie really does announce her as a potential star. Thankfully, she more than lived up to her potential, going on to become one of the best.

For Fontaine fans, The Man Who Found Himself is a fun piece of history to check out. It’s a breezy movie with a really silly story, but one that’s surprisingly enjoyable.

The Man Who Found Himself was released on DVD by Warner Archive in June 2019. The disc includes no bonus material, but the release makes up for it with a strong presentation. The source for the film appears to be well-protected.

Thanks to Warner Archive for providing this disc to review! You can buy it at WBShop.com.