The film version of Lorraine Hansberry’s immortal play A Raisin In The Sun is itself an example of a dream deferred. Hansberry dreamed of opening up the play, like so many other works were during the transition from stage to screen, with powerful images to drive home her points. Instead, the heavy hand of censorship at Columbia Pictures forced her to put that dream aside. The end result is essentially a filmed stage play – a good one, but not exactly what could have been.

A Raisin In The Sun is a prime example of how a simple story can mean so much. Set in Chicago, the Younger family is anxiously awaiting a $10,000 life insurance check after the patriarch, Walter Senior, dies. The son, Walter Lee (Sydney Poitier) wants to use the money to establish himself as a businessman with his own liquor store, believing that it will restore his masculinity and faith in himself. His mother, Lena (Claudia McNeil), simply wants to move out of their cramped, two-bedroom apartment.

The other residents of the apartment have their own dreams, too. Walter Lee’s wife, Ruth (Ruby Dee), wants to move to a home where their son Travis (Stephen Perry) can have his own room. Beneatha (Diana Sands), Walter Lee’s sister, wants to be a doctor and a chance to live her own life away from her mother’s thumb. 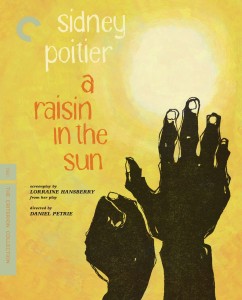 Reality always makes dreams difficult to come true, as Hansberry found out herself while making the movie. Although she wrote the film’s screenplay and almost the entire Broadway cast made the transition to celluloid, Columbia was too concerned about making a movie about an African-American family that would still appeal to white audiences.

Hansberry’s dreams of expanding the story’s scope beyond just the Younger’s apartment included scenes that would drive home the point that A Raisin In The Sun does not really have a happy ending. Without these, the ending means different things to different people, based on their experiences. Some viewers would easily understand that the family moving to an all-white neighborhood will be as challenging as it was to survive within the confines of the apartment. Others might think that just by getting that house, their dreams come true. Hansberry wanted everyone to see the former was the true case, based on her own father’s experiences after moving his family to an all-white Chicago neighborhood.

By the time the film was made, the actors had spent years playing these characters, and that shows onscreen. However, it would have been fascinating to see what Lloyd Richards would have done if he was allowed to reprise his role as the director. Columbia hired Daniel Petrie, who chose more or less to let the actors work with noninvasive directing.

Cinema is filled with some incredible “what-ifs,” but one of the most underrated is “What if Lorraine Hansberry got to make the A Raisin In The Sun movie she wanted?” A Raisin In The Sun certainly does not lose any of its power without Hansberry’s expanded vision for the film, but the nagging feeling that the film could be so much more powerful never leaves.

Criterion has presented a very special edition of A Raisin In The Sun. On the technical side, the film looks magnificent, with a new 4K digital transfer. The film was shot by Charles Lawton Jr., whose other credits include The Lady from Shanghai, 3:10 To Yuma and many more.

You can tell that Criterion knew this was not a title they could skimp on. This release is packed with material that provides a complete portrait of the film, the play and its history.

This is one of the truly great Criterion Collection Blu-rays, produced with the kind of care anyone would wish for their favorite films. The film version of A Raisin In The Sun is a marvelously acted experience, but the extras here provide an unprecedented, in-depth look at the creation and legacy of an American masterpiece.

One thought on “Criterion Blu-Ray Review: Lorraine Hansberry’s ‘A Raisin In The Sun’”