“What’s wrong? Don’t you think it’s funny? I thought it was a scream.” “It was alright.”

Who’s Afraid Of Virginia Woolf? perhaps more so than any other film makes us question what exactly can be considered entertainment. Seeing dancers glide across the screen is joyous. Watching war heroes fight back the enemy is entertaining. Seeing a team overcome insurmountable odds to beat their rivals is fun. In this particular case, we are forced to consider a couple working hard to break down their marriage as entertainment. 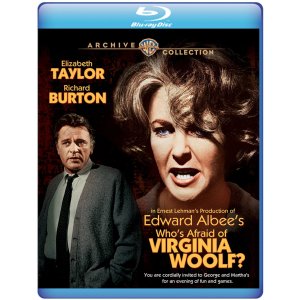 Of course, it is when you have two of the world’s biggest movie stars at each other’s throats for two hours. It is when we have two supporting actors who are just as shocked by what they are watching as we are on the other side of the screen.

Virginia Woolf?, based on Edward Albee’s seminal play, takes place over a single night after a party at a small New England college. It’s 2 a.m., but history professor George (Richard Burton) and his wife, Martha (Elizabeth Taylor), the college president’s daughter, are still planning to host two guests. Nick (George Segal) is a young biology professor who arrives with his wife, Honey (Sandy Denis). Martha invited the two over at the party, much to George’s chagrin.

Nick and Honey have no idea what they are in for. They get involved in George and Martha’s games of wit that test the limits of how far verbal torture can go. When Martha tells Honey that she and George have a son, the night truly becomes a descent into madness and hell.

Upon first viewing of Virginia Woolf?, it seems like a typical piece about a relationship breaking apart, but the film is so much more than that. It’s a puzzle, a game even for the audience to figure out. What is real? How many of these stories George and Martha share with Nick and Honey actually happen? Are the two really mad or just drying to pull off some elaborate joke? Perhaps Nick and Honey just stumbled into a vicious therapy session gone awry the moment Martha broke George’s rule.

With Mike Nichols at the helm, Virginia Woolf? features four fantastic performances. Richard Burton is more than his usual fantastic, swinging from brooding to uproarious anger without missing a beat. Elizabeth Taylor is a little shaky, but when she’s delivering her monologues, it’s astounding. You simply can’t look away. Sandy Denis and George Segal manage to hold their own. Since Denis won an Oscar and Segal didn’t, it’s probably easy to overlook what he does in the film. However, Segal is just as great, with a mix of naivete and just enough experience to figure out when he’s been played.

There are countless other aspects to Virginia Woolf? that are exceptional – from Haskell Wexler’s beautiful B&W cinematography to Alex North’s score – but I’ll just get to the main point here. What’s the new Warner Archive Collection Blu-ray like? It’s perfect, as it looks like some restoration work was put in. You might be tricked into thinking that a talky film like this one doesn’t need the high-definition treatment, but that’s wrong.

Extras are carried over from the two-disc edition. They include:

Each time I watch Virginia Woolf?, I’m left glued to my seat as it ends, just thinking about what it all means. On paper, it sounds like a movie that will get annoying quick. How long can you stand two people yelling at each other before it gets tiring? Who’s Afraid of Virginia Woolf? shows that we can at least stand 131 minutes of that.

Thanks to Warner Archive for providing the Blu-ray for this review!