In March, Flicker Alley released Marcel L’Herbier’s 1924 film L’Inhumaine (The Inhuman Woman) on Blu-ray. For most of us, this film is unheard of, lost in time and overshadowed by silent films made in Germany. Most of the great European silent films we think of from the ’20s were made in the Weimar Republic, but France had its own great filmmakers at the time. L’Herbier was one of them and L’Inhumaine was one of his great contributions to cinema.

The film isn’t very avant garde when it comes to plot, but L’Herbier was a true artist with the image. Written by L’Herbier, novelist Pierre Mac Orlan (Port of Shadows) and star/co-financier Georgette Leblanc, L’Inhumaine is melodrama of the highest order. Leblanc stars as Claire Lescot, a famous opera singer who wines and dines with suitors at home. Two of her suitors are maharajah Djorah de Nopur (Philippe Heriat) and scientist/engineer Einar Norsen (Jaque Catelain).

Einar is hopelessly in love with Claire and tells her that he will kill himself if she doesn’t love him back. He follows through with his threat and when it is reported that he loved her, Claire is booed during her next show. Surprisingly, Einar didn’t really kill himself and Djorah will take extreme measures to make sure Einar doesn’t end up with Claire. 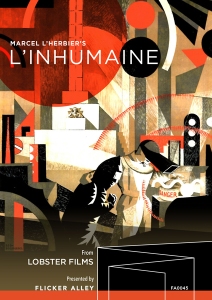 The straightforward plot was a result of meddling by Leblanc, who would only co-finance the movie if she starred in it. L’Herbier wasn’t in a position to refuse, especially since she also offered to be behind the film’s release in the U.S. But while L’Herbier made concessions with storytelling, he refused to compromise his vision of how the movie needed to look. It’s strikingly beautiful, with no shot the same as the last.

Every sequence is brimming with creativity, from the color tinting, to the camera angles with this glorious premonition of Cinemascope and unique lettering for intertitles. L’Herbier doesn’t just use irises to direct your attention, but also blocks on the frame to make it thinner or wider. Some shots are just thin strips, emulating a Cinemascope-style ratio within a 1.33:1 square frame. It’s fantastic just to imagine what these scenes would be like if L’Herbier had real Cinemascope to work with.

The film reaches a dramatic climax in Einar’s lab, which gives Dr. Frankenstein’s lab a run for its money. While some parts of it look drab and empty, Einar’s fleet of workers have plenty of tools to play with to bring someone back to life. Famed artist Fernand Leger brought his own work to life in the laboratory. Leger was just one of a group of artists who worked with L’Herbier on the film.

L’Inhumaine did originally feature a score by Darius Mihaud, but this is lost. In 2015, when Lobster Films restored the movie, Aidje Tafial was hired to write a unique score that is both modern and fits the film perfectly. The score by Tafial, as well as a more classical score by the Alloy Orchestra, is included on the Flicker Alley Blu-ray.

Extras are admittedly slim, with just a 15-minute video essay on the making of the film (including some outtakes) and an 18-minute interview with Tafial on his score. A longer piece on L’Herbier would have been cool, but the included booklet provides a good overview of his life and career.

L’Inhumaine is a great silent classic looking to be rediscovered. Flicker Alley’s Blu-ray is perfect and the film proves how engrossing silent movies can be, even today. This film may have been made 92 years ago, but it’s still entrancing.

Thanks to Flicker Alley for providing this Blu-ray to review!