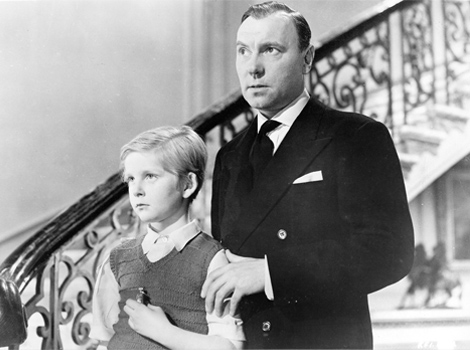 When it comes to British director Carol Reed, there is usually one movie that comes to mind – The Third Man. At the 2016 TCM Classic Film Festival, those who don’t quite know of his other work were in for a treat. Two of his films – The Fallen Idol (1948) and Trapeze (1956) – were both on the schedule. The films could not be more different and come from two completely unique eras in Reed’s career.

The Fallen Idol comes just before The Third Man and, in many ways, is a test run for the more famous film. Like The Third Man, The Fallen Idol is also based on a Graham Greene story and centers on lost innocence. While the top-billed stars are Ralph Richardson and the incredibly beautiful Michele Morgan, young Robert Henrey is the film’s true star.

Henrey plays Philippe, the young son of a French diplomat. His parents have left him at home with their butler, Baines (Richardson) and Baines’ hard-as-nails wife (Sonia Dresdel). Without a true father figure around every day, Philippe idolizes Baines. He even follows him out of the home to a tea shop, where Baines is meeting the young Julie (Morgan). Baines and Julie are having an affair, with Julie waiting for Baines to finally get out of his marriage.

During an argument between the married couple, Mrs. Baines accidentally falls and dies. Philippe thinks that he has seen his idol commit murder. That leads into the film’s fantastic last act, in which Philippe tries to help Baines during the police investigation.

The suspense during the investigation would make Alfred Hitchcock happy and it appears that Reed was very influenced by his fellow Englishman. But Reed was also in the middle of an incredibly dark streak while making The Fallen Idol. Before this movie, he made the excellent noir Odd Man Out, which featured James Mason running around a Northern Ireland that eerily predicts Vienna in The Third Man. Both Odd Man Out and The Third Man were shot by Robert Krasker, but Reed worked with noted French cinematographer Georges Perinal on The Fallen Idol. It doesn’t matter though, as The Fallen Idol gets as dark as its neighbors. When Philippe runs through the streets of London at night, with his shadow plastered on the wall, one can’t help but think of Harry Lime’s shadow.

The Fallen Idol also highlights Reed’s knack for getting great performances out of children. Reed would even win the Best Director Oscar for Oliver! (1968). Henrey is fantastic alongside the far more experienced Richardson and it’s hard to believe that he never did any previous work in film. Henrey, who attended the digital screening at the TCM Classic Film Festival, said that Reed saw his picture on the cover of a book with a story about French citizens who migrated to London during World War II. Since Henrey was French but grew up in England, he had a peculiar accent (he now lives in Connecticut, which he joked has created an even stranger accent) that makes it seem like he is even more out of his element in London.

While The Fallen Idol finds Reed at his creative peak, Trapeze comes from a difficult period for him. The director’s work wasn’t too well received during the early 1950s and, while Trapeze was a commercial hit, it didn’t help his career.

Trapeze is an overlong circus melodrama, boiling down to a simple love triangle between three acrobats played by Tony Curtis, Burt Lancaster and Gina Lollobrigida. Reed’s style is so dulled down that Lollobrigida said co-producer Lancaster tried to step in to direct her. She refused, insisting that Reed was the director. Still, the fact that Lancaster was not pleased with Reed says much about his directing at the time. Maybe he was losing his confidence. After all, he wouldn’t have another critical success until Oliver!.

What Trapeze does have going for it is it being in color and wonderfully shot by Krasker. The Egyptian Theatre’s huge screen was great to showcase scenes of the actors (or stuntpeople) swinging from one side of the circus ring to the other. Krasker and Reed took full advantage of the Cinemascope frame. TCMFF also showed a 35mm print, which was glorious. It was rough, but was still a great experience.

Reed might have a tough time rising to the level of “great British directors” because of his connection with more powerful personalities, but his late ’40s work still stands with some of the best. Odd Man Out, The Fallen Idol and The Third Man remain fresh and unforgettable. Getting to see even one of them on the big screen was a treat. And while seeing Trapeze on a big screen was candy for the eyes, it stumbles in the thinking department. (I would much rather have seen Beat The Devil to represent Gina Lollobrigida.)

3 thoughts on “TCMFF: Carol Reed on the big screen – ‘The Fallen Idol’ and ‘Trapeze’”