It’s August, which means only one thing: TCM’s Summer Under The Stars programming is in full swing. Friday was Katharine Hepburn’s day and, while I should have been excited, it was a bit of a bummer. They mostly played things I’ve seen before and stuff they play repeatedly. There was only one title that really caught my eye, which was a 1937 RKO film directed by George Stevens called Quality Street. 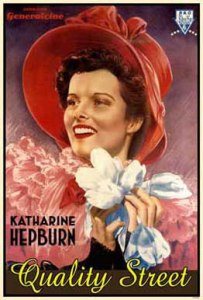 Based on a 1901 play by J.M. Barrie (Peter Pan) and co-starring Franchot Tone, this is a unique film in Hepburn’s early oeuvre. It centers on Phoebe Throssel (Hepburn), who fears that she is destined to become an old maid like her sister Susan (Fay Bainter, Jezebel). She hopes that Dr. Valentine Brown (Tone) will propose marriage, but he goes off to fight in the Napoleonic wars.

A decade later, he returns to Quality Street to find the Throssel sisters teaching and assumes that Phoebe has given up on romance. Rather than convince him that she hasn’t, Phoebe creates Livy, an alter ego to woo Brown. But Livy isn’t the kind of woman for Brown, so Phoebe, Susan and maid Patty (Cora Whitherspoon) struggle to keep Brown around before Phoebe loses her chance forever.

Quality Street was clearly made as an attempt to soften the image of Hepburn as Bringing Up Baby was still a few months away and Sylvia Scarlett earned mostly negative attention in 1935. Quality Street does succeed in showing a much softer side of Hepburn, but the script by Allan Scott (Top Hat) and Mortimer Offner gives much better jokes to the supporting cast. Yes, that is Eric Blore playing a character who isn’t a butler. And there’s a hilarious trio of old gossiping women lead by Estelle Winwood. Tone is also his typical dashing, witty self.

This is also early in Stevens’ career, but he’s already showing a flair for turning lightweight material into an interesting film. There’s some unique camera movements, specifically in the very opening when he takes full advantage of the stage. The camera moves in and out of the house without cuts.

Still, this 80-minute movie is a breezy, forgettable affair. It was fun to catch and see an early attempt by Hepburn to step outside drama. But this is hardly her best work. After all, she made Stage Door the same year and that’s a much more memorable film.