Welcome readers to Movie Mania Madness and thanks to the Classic Movie History Projects hosts Aurora of Once Upon A Screen, Ruth of Silver Screenings and Fritzi of Movies, Silently for this event. Flicker Alley is also sponsoring it, so check them out (and buy their awesome Chaplin Mutual set). This is my first contribution to a blogathon, so thanks to everyone for welcoming me to the fold and a chance to write about one of my favorite musicals and one that certainly has historical importance.

Three war buddies arrive home after World War II and since they each lead very different lives, they probably won’t see each other for years. So, they commit to meeting again in 10 years, only to discover that their 1955 selves are much different from their 1945 versions. It’s a story of disappointment and the importance of coming to terms with yourself. But it certainly doesn’t sound like the idea for a musical, which makes It’s Always Fair Weather one of the most unique movies ever to come out of MGM’s Arthur Freed unit.

On its face, It’s Always Fair Weather should have just been a sequel to On The Town, with writers Betty Comden and Adolph Green looking at how the lives of their three sailors turned out. They even had Gene Kelly starring and co-directing with Stanley Donen. But something happened along the way. Their script and songs became cynical, embracing the idea that youthful dreams don’t always become reality. A subplot mocking television creeped in, which only seemed fair because it was being made in CinemaScope, a process that only existed to keep television down. Kelly went along with it all, probably because of his sour mood at the time. Things were getting worse for him before they could get better in the mid-1950s, so why not make a movie that encapsulated that.

Kelly stars as Ted, who served in the army with Doug (Dan Dailey) and Angie (Michael Kidd). They all have big dreams after coming home from the war. Ted wants to be a lawyer, Doug dreams of studying painting in Paris and Angie wants to become a gourmet chef. In a traditional musical, things may have gone like they dreamed, but It’s Always Fair Weather goes in the opposite direction. Ted became a boxing promoter with gambling problems. Doug went into advertising, dealing with stress at work and at home. Angie is stuck owning a burger joint in Schenectady and has a large family.

Even though their lives have changed, they still meet up at their favorite bar 10 years after the war ended. Not only do they learn that nothing went right, but they also learn that they hate what they all became. Still, it is not the disappointment that interests Jackie (Cyd Charise), who works at Doug’s ad firm. Looking like she popped out of the more beloved MGM musicals, Jackie falls in love with the romantic idea about the reunion of three “friends” and insists that they appear on television for another reunion.

It’s Always Fair Weather came out at such a unique point in American history. It’s 1955, the heart of the Eisenhower age and the Cold War is just getting started. The Korean War ended two years ago and McCarthyism hadn’t quite died down yet. In this environment, musicals were already dying out, as manifested by the fact that MGM wouldn’t let Kelly film Brigadoon in Scotland the year before. But musicals were still supposed to be escapism from all this. If moviegoers wanted to face reality, they saw films with Marlon Brando (who coincidentally, only appeared in Guys and Dolls in 1955) or James Dean or Westerns with John Wayne. You don’t go to a musical starring Gene Kelly for a dose of realism. 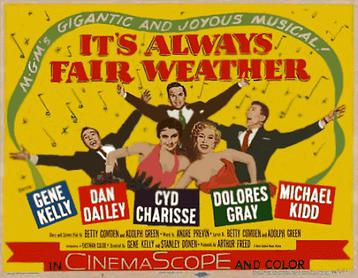 It also comes in the face of the idea that American men came home from wars to lead happy lives. Today, the reality of post-war life is more publicized, as we hear about issues at VA hospitals or rising veteran homelessness. But in the post-World War II society, the fact that not all men had a family to come home to right after the war and a job that made them happy wasn’t talked about. And if it was – again – it wasn’t expected to be the subject in a musical.

Kelly was forced to make the film in CinemaScope. While he’d already starred in Brigadoon, that was directed by Vincente Minelli. Donen had also previously worked in CinemaScope on Seven Brides for Seven Brothers. But Kelly began to embrace the wide frame, playing with what they could show. Cinematographer Robert J. Bonner, Kelly and Donen often show the audience three scenes in one shot to give us the simultaneous feelings of the men. There’s even the fantastic “I Shouldn’t Have Come” scene, when they squash and stretch the frame into corners of the full image.

There’s one truly glorious, classic MGM music moment in the whole film – “I Like Myself,” but even this reveals something different in the songwriting from Comden & Green. Kelly’s character doesn’t sing about how beautiful and lovely Cyd Charise is. Instead, he sings about himself. This is an “all about me” musical even in its brightest moments. Cynicism while still sweet. And just after that, we have Dan Dailey’s showstopping “Situation-wise,” another self-centered song about how his character is tired of the life he leads. (Michael Kidd’s solo song – about how hard it is to raise a full brood of children – was cut from the final film and appears on the DVD.)

Even in the end, It’s Always Fair Weather refuses to end in the way old MGM musicals used to. Sure, Kelly’s character gets the girl, but everyone still has to move on and live their lives. It’s a happy ending in the sense that at least no one died. But it ends with three guys realizing that you don’t have to be best friends to love each other. It was also proof that the “musical” is not a genre, but a medium to use to tell a story, even a serious and cynical one.

7 thoughts on “‘It’s Always Fair Weather,’ Except When It’s Not: The Musical Gets Cynical”