Frank Tuttle’s Here Is My Heart is the third film in Universal’s The Bing Crosby Collection and finds Paramount in full swing, fully understanding the magic it had with Bing. 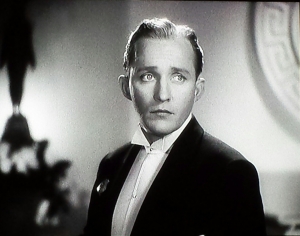 Unlike the previous films in the set from 1933, Here Is My Heart shows a better understanding of Bing’s talents. He gets to sing a few songs that fit in well with the story, including “June in January.” Of course, the story is still overly simple, since it only runs 76 minutes.

That story, which also begins on a boat (what is it with the 1930s obsession with boats?), finds Bing as J. Paul Jones, an American millionaire thanks to his “crooning.” He hopes to get a second pistol once owned by the real John Paul Jones so he can present it to the U.S. Naval Academy. When he’s told that a Russian princess (Kitty Carlisle) has it, he rushes back to Monte Carlo to get it and that requires him to pretend to be a waiter. He falls in love, apparently forgetting about the girl (Marian Mansfield) he sang to on the boat.

Now that I’m halfway through this set, I have to say these films are a bit more enjoyable than expected, partly because they use songs as part of the story. Bing isn’t asked to dance, so the musical numbers don’t stop the story. Instead – even though songs are repeated multiple times, they actually advance the plot.

I’m incredibly excited for the next film in the set, Mississippi, which pairs Bing with W.C. Fields!