There was actually a time when Bogie wasn’t the greatest star who ever lived. The Maltese Falcon, John Huston’s startling debut directorial effort, changed all that. Bogie became the greatest star and no one will ever even get close to how great he is. His role as Detective Sam Spade is remarkable. Talking about how perfect the film is is almost as pointless today as convincing someone how great Les Demoiselles d’Avignon is.

What sparks The Maltese Falcon is Huston’s use of the English language. These characters spew perfect one liners every time they breathe and the entire climax of the film is a twenty minute meeting of the minds. Words roll of the tongues like explosions and each one gets bigger. It’s perfect film making. Huston works his script in a way that not a single plot line is finished by the time we get to that point, allowing every line to tie up one more thread.

The film was just recently released on BluRay by Warners, but I just picked up the DVD inexpensively last week. The BluRay includes all of the features on the DVD, save for the two prior versions of the story, the 1931 The Maltese Falcon and 1936’s Satan Met A Lady. The ’31 film is actually pretty decent, filled with pre-code sexuality, but it’s weighed down by horrid acting and the constrictions of being an early sound film. Satan Met A Lady is close to unbearable…the only reason to watch it is to see Bette Davis and you can do nothing but feel pity for her being stuck in that. 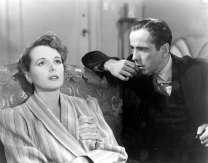 Other extras include an informative commentary by Bogie biographer Eric Lax and the silly ‘Warner Night at the Movies’ filler shorts on disc one. Disc two houses the other two films and the third disc has a 30-minute ‘making-of’ and a 40-minute TCM featurette on Bogie trailers. There’s also a ’41 studio blooper reel (which actually has none from the film) and 3 radio adaptations (I really need to start listening to those…).

Technically, I found the sound and picture to be pretty good. I still haven’t had the opportunity to see how it looks upscaled through a BluRay player yet, but I can’t imagine it being too bad, since this was released in 2006. The quality of the BluRay screenshots look amazing as seen on DVDBeaver, but where this isn’t a visually (it’s all about those words) amazing film, I’m happy to have it in Standard Definition.

The Verdict: The Maltese Falcon is a brilliant film that everyone should see. I can’t believe it took me so long to do so, but once I did, I loved every minute. It’s a great one to throw on and just watch the 100 minutes melt away. Honestly, I found the ’31 version to actually be pretty decent, but Satan Met A Lady is just horrid. I wanted to get the BluRay, but I couldn’t resist getting this for $15. When the BD came out, Warner actually brought this out of print, re-issuing just the first disc in terrible cover art that resembles the BD. So, if you are still DVD-only, the three-disc set is the way to go and you should have no trouble finding it online.